Kids at the Center of Her Mission 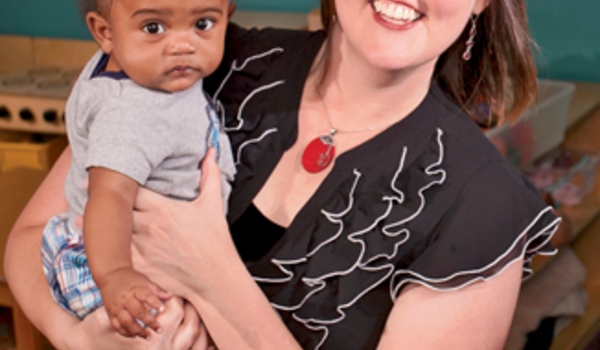 Many parents are fortunate enough to have a support system for their children. If there’s an emergency, they can count on family or friends to look after their young ones. But some parents are not so lucky, and any disruption — from an eviction to a trip to the hospital for surgery — can threaten to throw the family into chaos.

Emily Shurilla, MSW ’05, is program director for Providence House, a crisis nursery in Cleveland dedicated to filling this void. The agency provides temporary shelter and daily care for children whose families are experiencing a crisis, as well as case management, parent education, trauma services and basic need items for the adults. “If I had children and needed surgery, I would call my mom and ask, ‘Could you please watch them for a few days?’” Shurilla says. “But not everyone has that option, so we’re able to provide that service.”

Hailing originally from New Springfield, Ohio, the 33-year-old interned and then worked part time for the St. Louis Crisis Nursery during her first year at the Brown School in 2004. The nursery made a major impact. Upon moving back to Cleveland, Shurilla joined Providence House as a child-care volunteer in 2006 and began in her current role in 2007. The center cares for up to 10 children at a time — from newborn through age 6 — and Shurilla’s daily obligations vary widely.

“Today I fielded inquiries about volunteering with the agency, spoke to a PhD in New York about a new therapeutic intervention, went to Target to pick up baby clothes, and spent an hour caring for an 8-day-old infant when the rest of the staff and children went for a walk,” she says, adding that she’s also responsible for overseeing the child-care staff and other obligations. “You have to be really flexible,” she adds.

Parents’ reasons for needing Providence House’s services vary widely: Some are homeless, some have had their utilities turned off. Because of the housing slump, some have been forced from their homes after their landlords were foreclosed on. Many have medical needs requiring in-patient surgery and major recovery, while still others are undertaking mental health or drug and alcohol programs.

“If mom can’t get treatment because she has no one to take care of her children, that family’s at huge risk for disruption down the road,” Shurilla says.

The facility’s license allows children to stay for up to 60 days in most cases, but the average stay is less than a month. Providence House, which was founded in 1981 and runs mainly on private donations, also provides access to social workers and other care providers.

Shurilla says her time at Washington University benefited her career in ways both practical and philosophical. “The course work helped me establish a framework for thinking about issues, such as poverty, and for understanding the population I would work with — and it taught me how to write a grant,” she says.

Currently she and many others at Providence House are focused on a vast expansion. Based out of two nearby houses in the Ohio City neighborhood of Cleveland, Providence House is undergoing a 6,000-square-foot addition to one of the homes, which will allow the agency to care for up to 20 children at a time. The agency is also seeking to secure licensing to care for children up to the age of 10. Other plans still in the feasibility phase include the opening of a medical crisis nursery.

Despite the difficult, and often traumatic, situations that bring people to her, Shurilla finds her responsibilities to be fulfilling. The parents have made the difficult decision to leave their children in Providence House’s care, which shows they’re working hard to create a more stable family environment. And though she sometimes gets frustrated with the more bureaucratic elements of her job, she knows of an easy fix. “All I have to do is walk down to the floor where the children are, because they remind me why I’m doing the work I’m doing.”

Ben Westhoff, AB ’99, is a freelance writer based in Los Angeles.

Join our group for young professionals who educate their peers about Providence House.